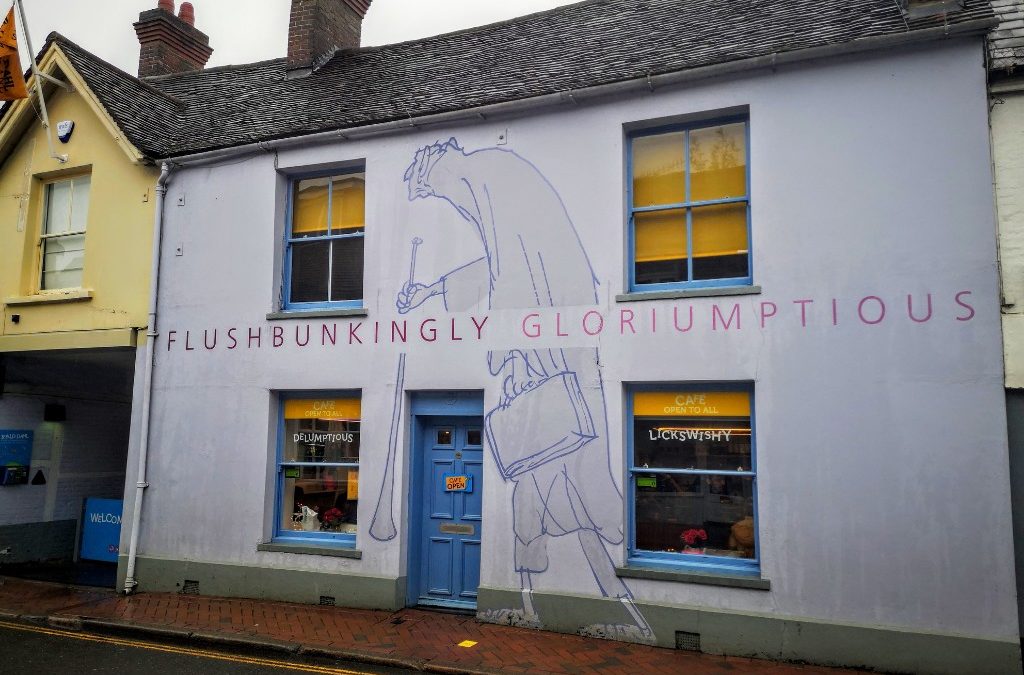 We first visited The Roald Dahl Museum and Story Centre back in January 2017 at a time when my eldest son was three and my youngest was 18 months. We visited mostly because my husband and I grew up with Roald Dahl and we thought it looked interesting. Then, you had to pay each time you visited and although my children had a nice time, I did think it would be better when they were a bit older. Well three years on and having discovered a number of other free museums to visit which were more age appropriate, we decided to go back. Why? Two reasons. My eldest son as I write this is now six and has read most of Roald Dahl’s books as well as studied him in school. The second is that it’s now much better value – you pay once and can return all year for free. 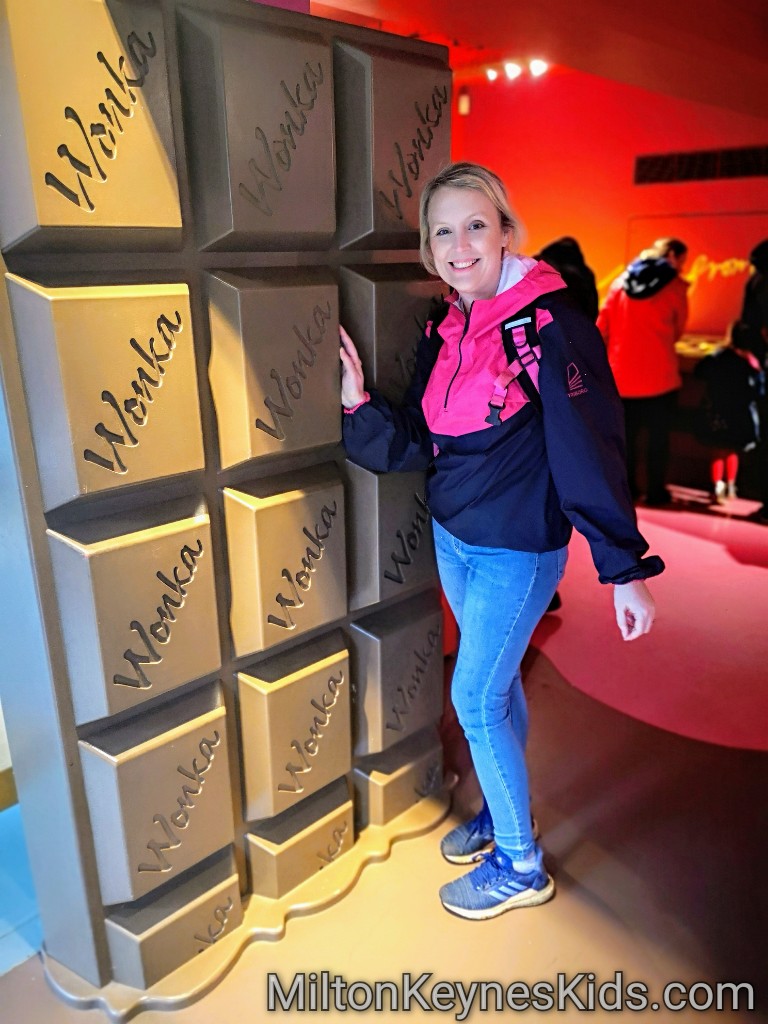 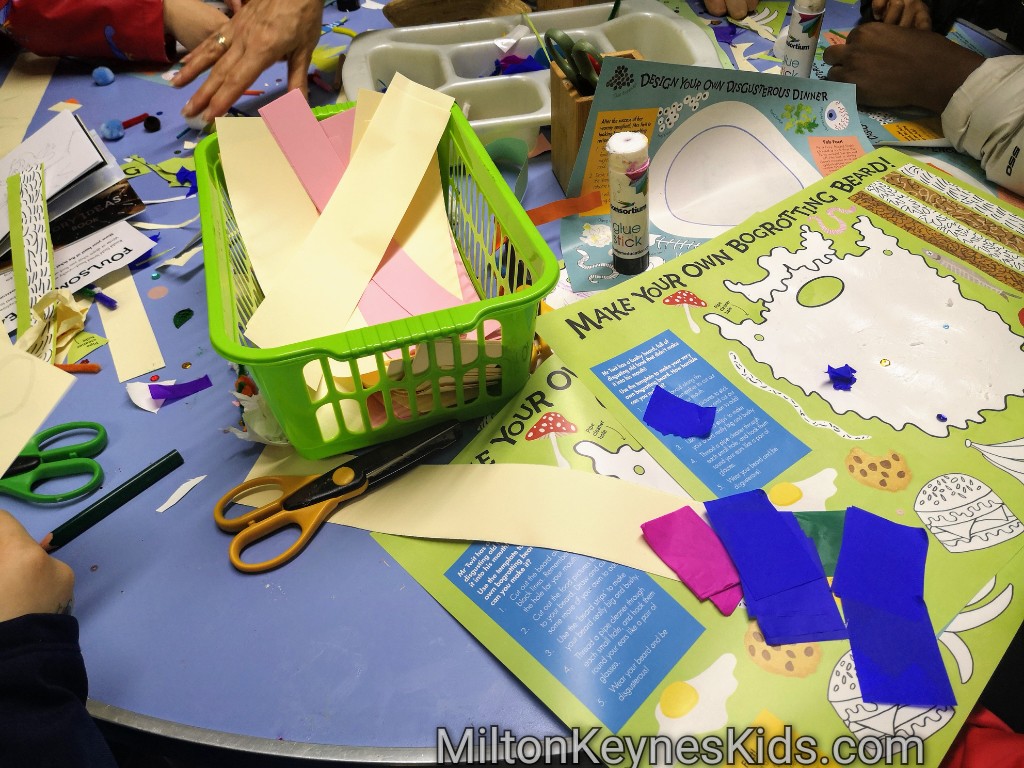 Where is the Roald Dahl Museum and Story Centre?

This is very important as some people do get confused. The Roald Dahl Museum and Story Centre is in Great Missenden in Buckinghamshire. The address is 81 to 83 High Street, Great Missenden, Buckinghamshire, HP16 0AL. You can put that postcode in to your sat nav. But before you get there, look out for the main public car park for the museum. I have to admit I don’t know how much it costs to park. We went on a Sunday and managed to park for free near the museum. Great Missenden is about 50 minutes from where we live in Milton Keynes. It does feel like a bit of a trek to get there. So what’s confusing? There is also the Roald Dahl Children’s Gallery – they are two different places. The gallery is attached to Bucks County Museum in the centre of Aylesbury. Don’t make the mistake of going there if this is the one you want to visit. Great Missenden – in the Chilterns – got it? 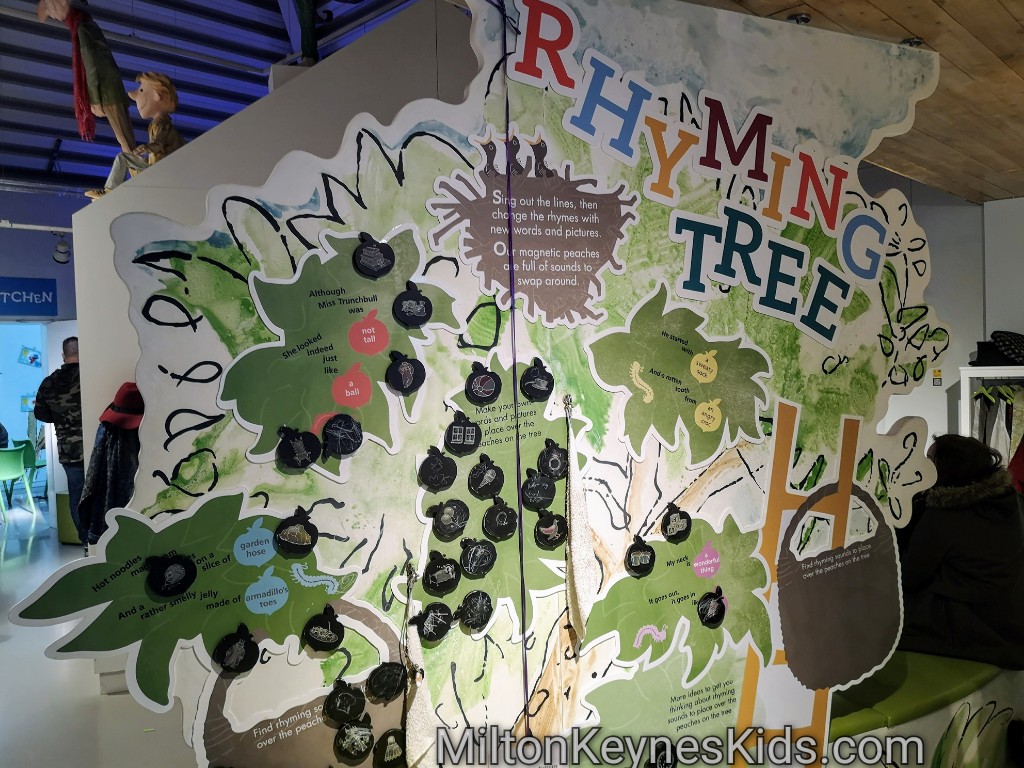 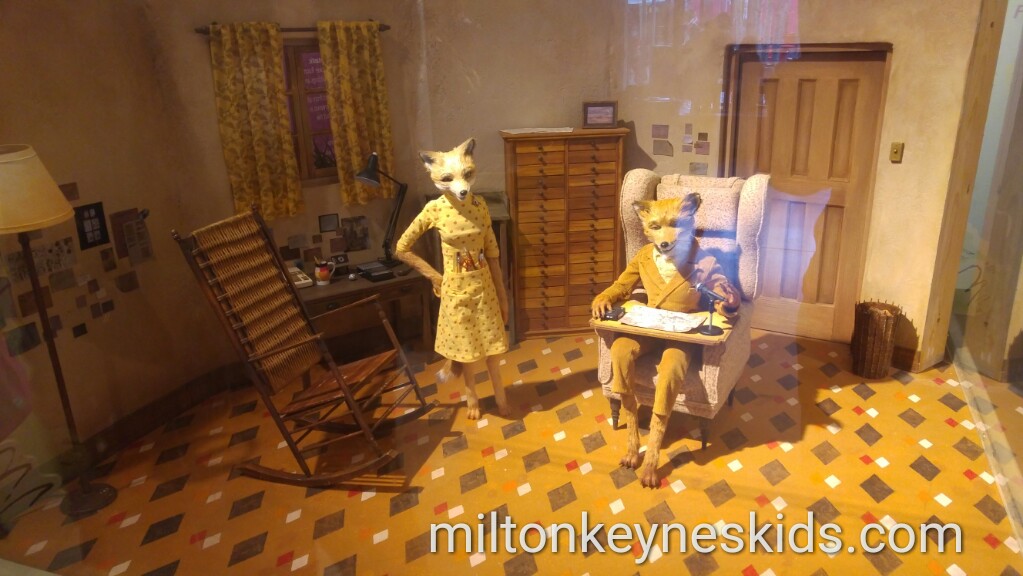 How much does it cost to visit the Roald Dahl Museum and Story Centre?

Please check their website for up to date prices but to give you an idea at the time we visited in February 2020 it was £7 adults, £4.70 child and under 5s were free. Your ticket now gets you in free for the rest of the year so it’s a much better deal than previously.  My eldest son did get in free with his Blue Peter Badge. 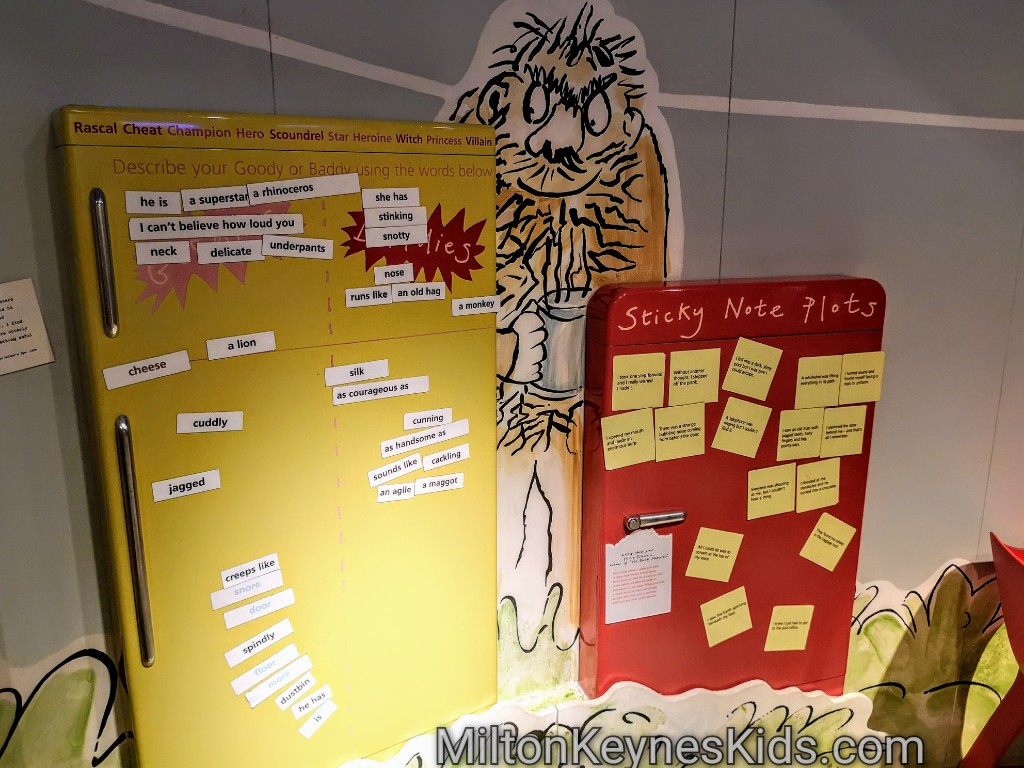 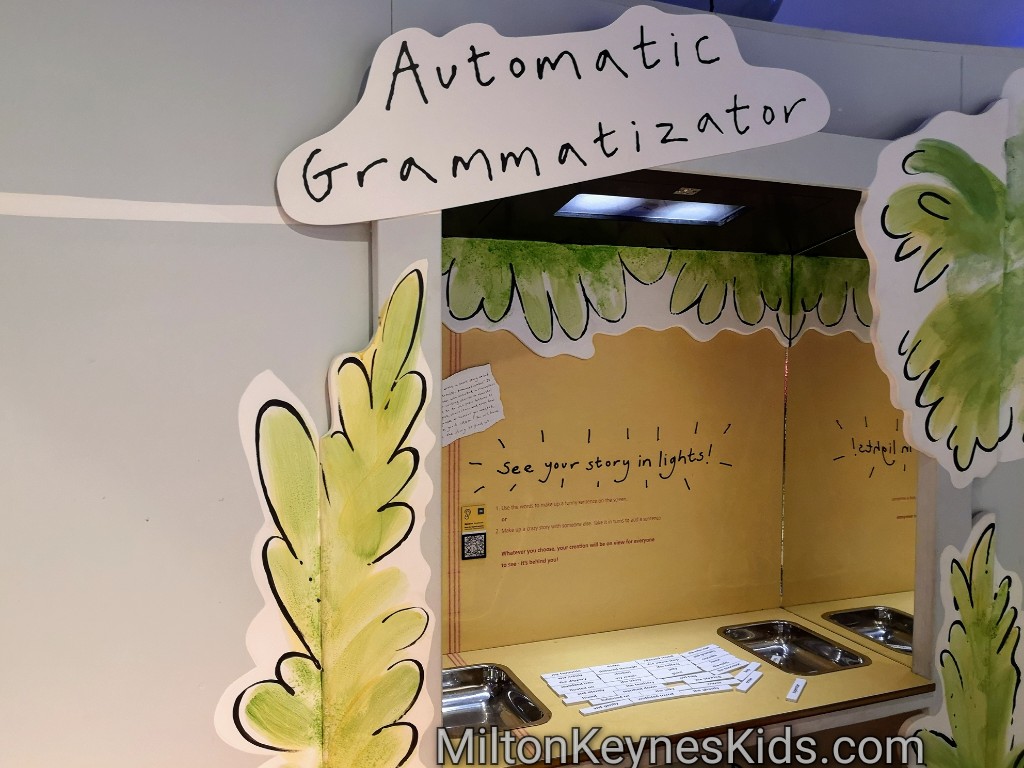 What’s at the Roald Dahl Museum and Story Centre like?

If you’re expecting a large, lavish museum complete with film sets like the Warner Brothers Studio then it’s nothing like that. The Roald Dahl Museum is in the beautiful village of Great Missenden – where the author lived for 36 years. The museum is quite small with three galleries. Boy gallery looks at Roald Dahl’s school days while Solo gallery houses his original writing hut.There’s quite a lot of information in them and some hands-on activities. It’s all about Roald Dahl’s life rather than his individual books. There’s Roald Dah’s writing chair which you can have photos in, word games, props from the Willy Wonka film and doors that look like a Wonka bar. My four year old loved a dream-catcher machine – mostly because he kept saying ‘bum’ into it which was then repeated back to him. There’s a craft area in which you could just sit down and make arty beards and plates of disgusting food. When we visited in February half term it was busy and we were in the museum itself for about two and a half hours, but that did include time stopping for both lunch as well as a whizzpopper hot chocolate in the cafe. 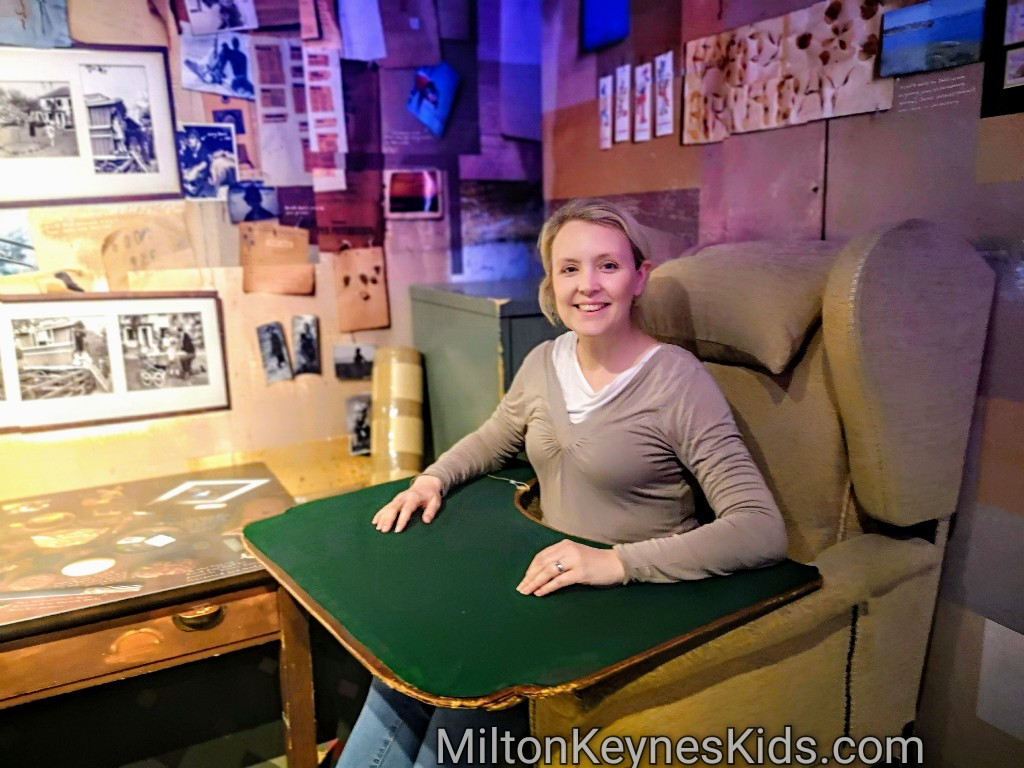 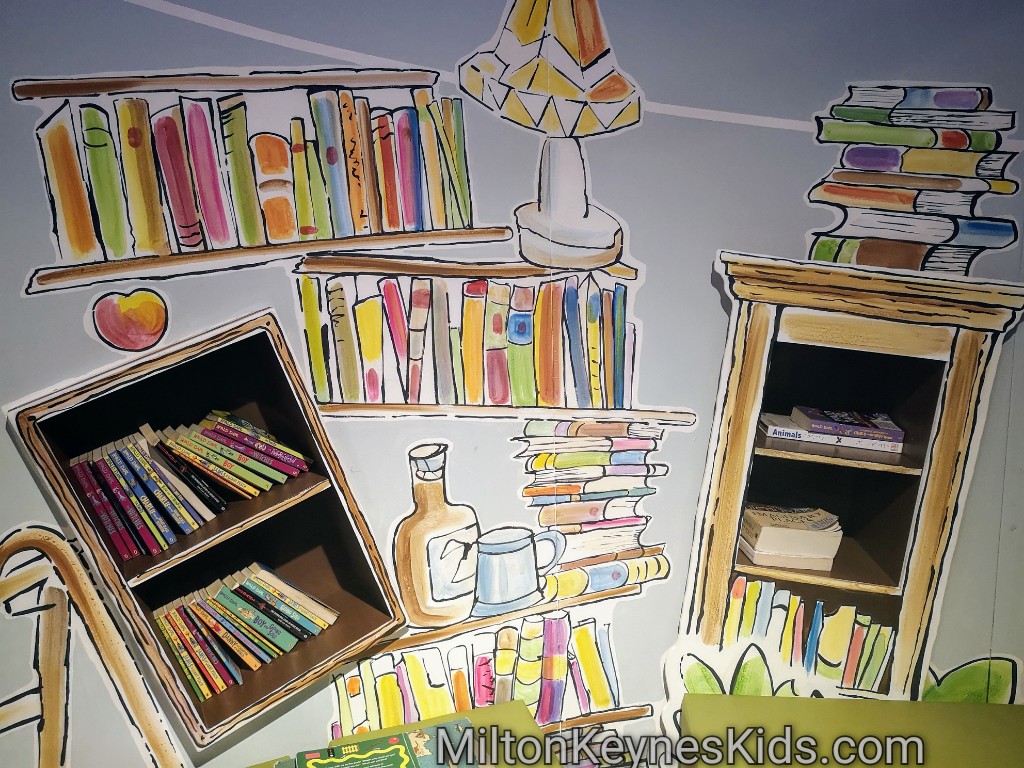 What do you do about food at the Roald Dahl Museum and Story Centre?

We took a picnic. There is an outdoor picnic area and an indoor picnic area. If you can’t find the indoor picnic area immediately then as you stand in the courtyard with the cafe behind you it’s a door in the right hand corner which I initially thought just took us to upstairs booked activities – but actually there’s a seating area there. There is a cafe which we bought a whizzpopper hot chocolate from – the children loved it although they were £3.40 each when we went. No hot food was being served at the time we visited. 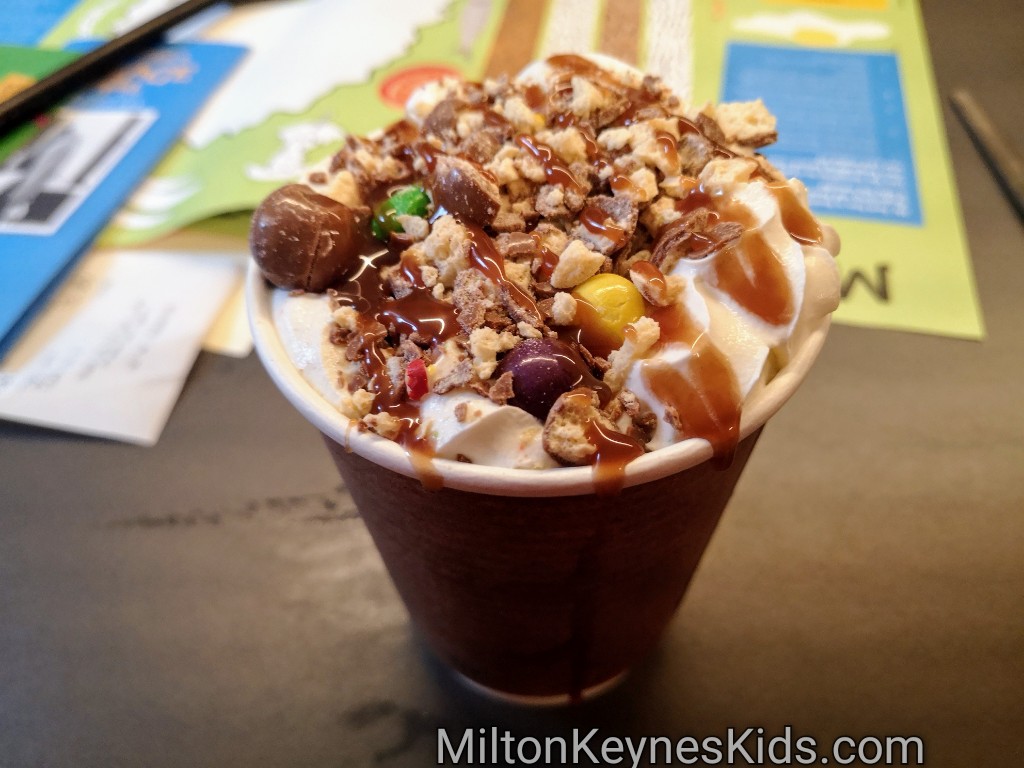 What else can do we in Great Missenden?

One of the biggest benefits of visiting the Roald Dahl Museum is it’s location. it was where Roald Dahl lived. Whilst at the museum you can pick up a couple of leaflets which help you explore the high street and see locations which inspired his writing as well find the location of his grave. Roald Dahl’s grave is about a 10 minute walk. My eldest son found it rather poignant and saw that a chocolate bar and pennies had been left on it. There’s also another leaflet about walks you can go on too – however it was pouring of rain when we went so we decided not to do those. If you’re looking to go somewhere else then Wendover Woods 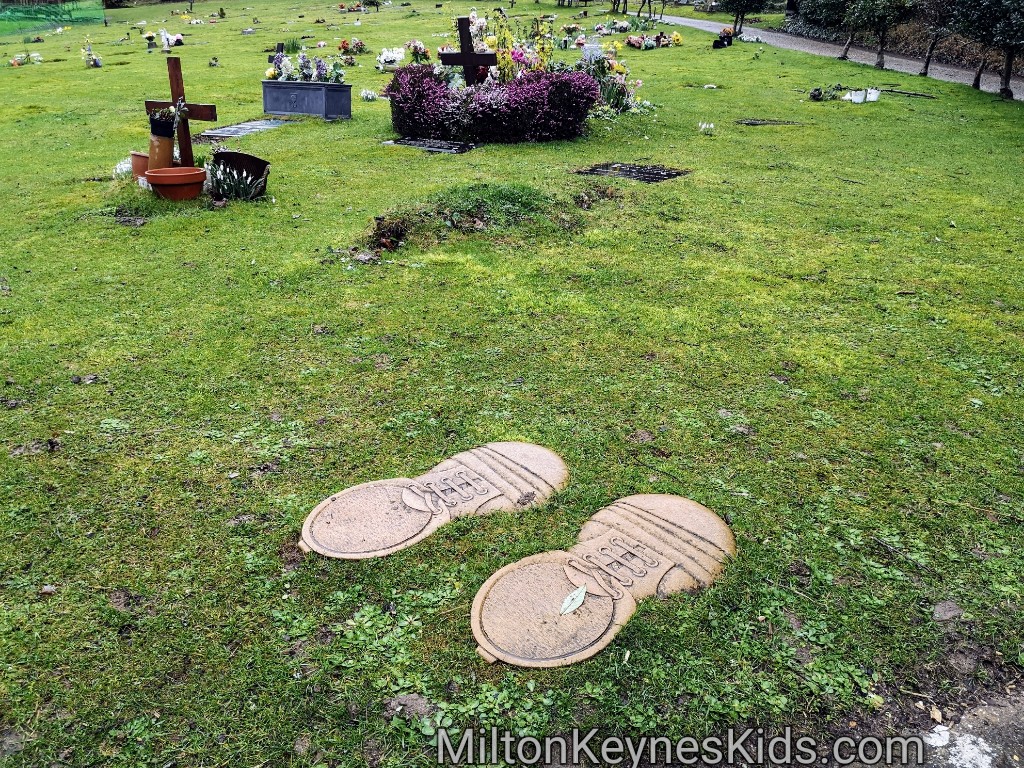 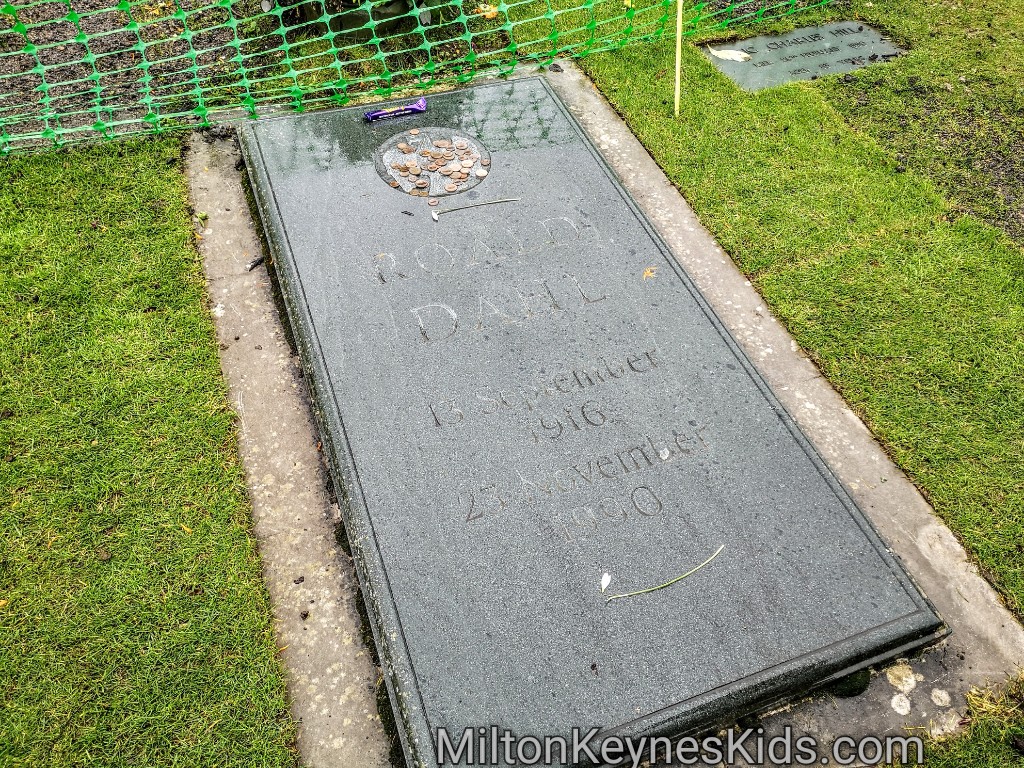 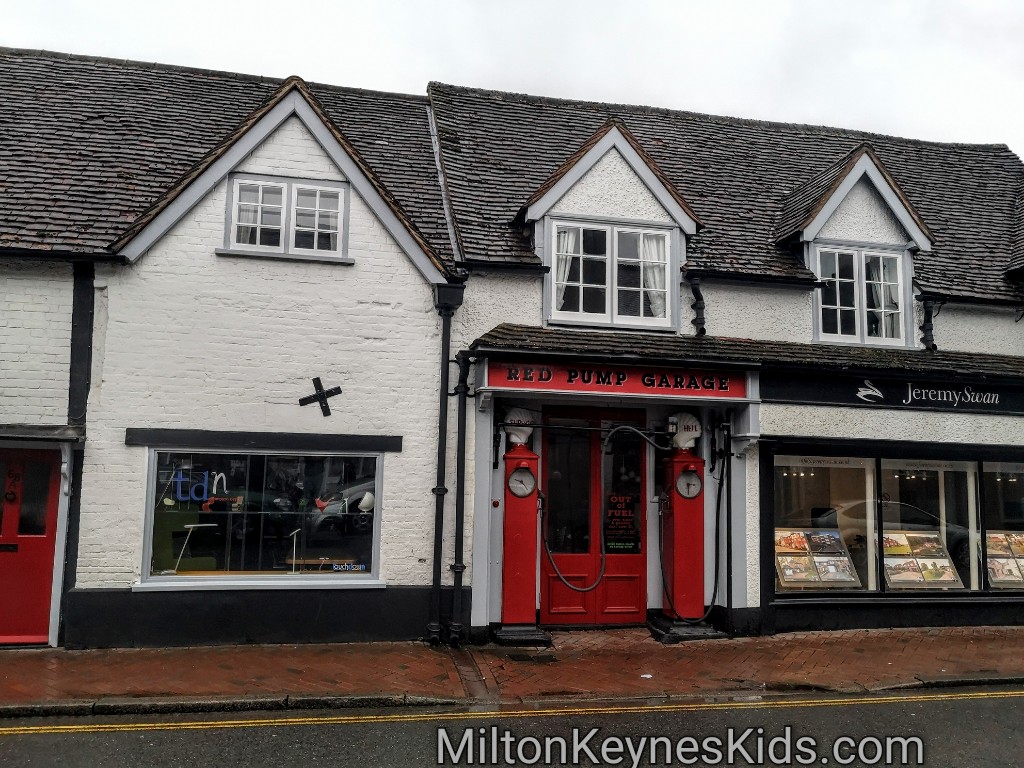 Would you recommend a visit to the Roald Dahl Museum?

Yes. We had a good time. BUT I would suggest that it is most suitable for children of reading age who have read the books by Roald Dahl. It is interactive but there is also quite a lot of reading and information that will most appeal to slightly older children. The museum is small so if you’re travelling some distance as we did I would definitely make the most of the location and go and visit Roald Dahl’s grave and go on a countryside walk. I think if you’ve got younger children then they will probably prefer The Roald Dahl Children’s Gallery which is in Aylesbury. That one has a broader appeal as the focus is more on fun and discovery and is attached to Bucks County Museum which is also worth a visit. If you’ve enjoyed this review then do have a look at the other places on my website where you can pay once then go all year for free. And also these museums are free. 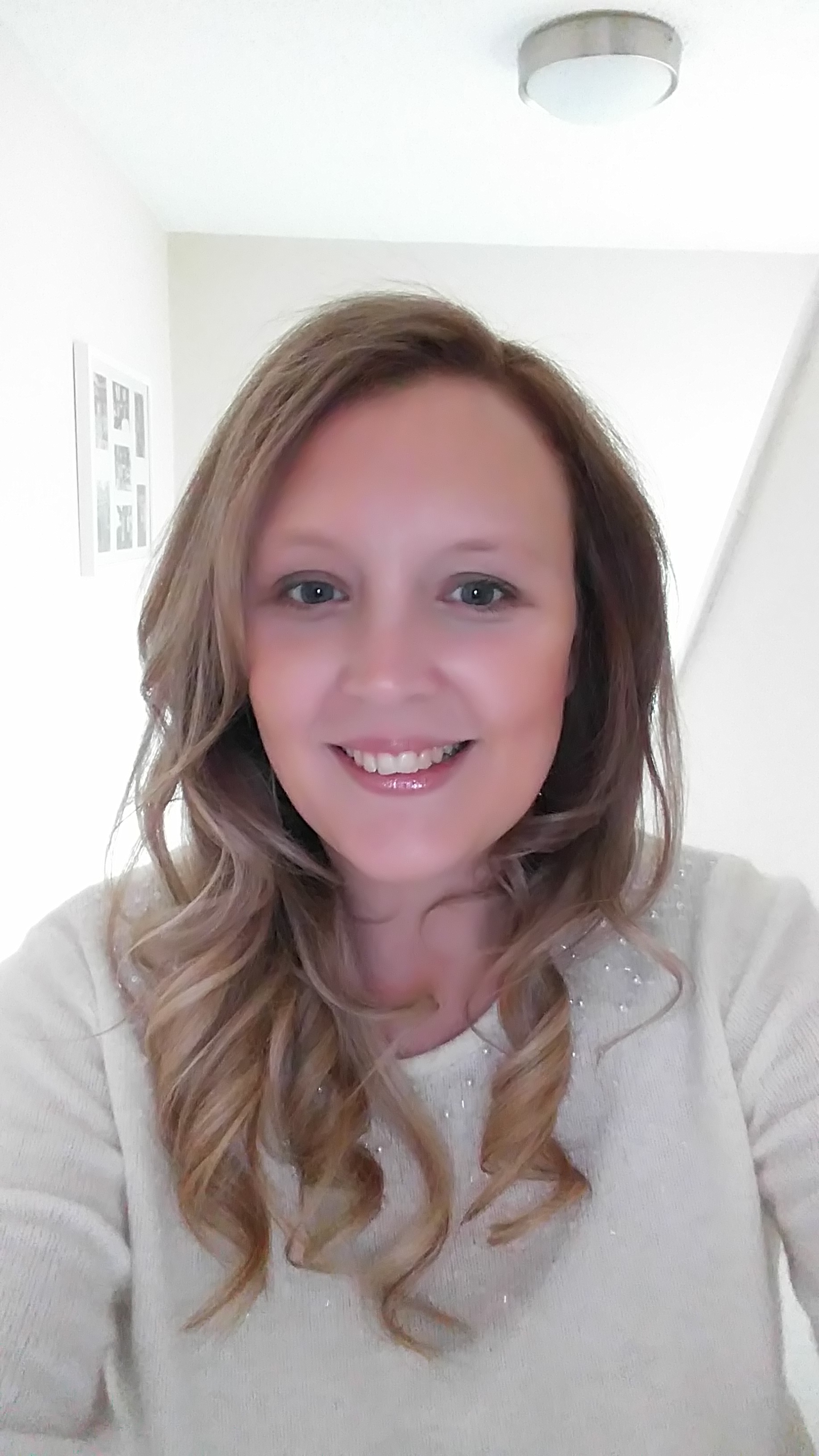