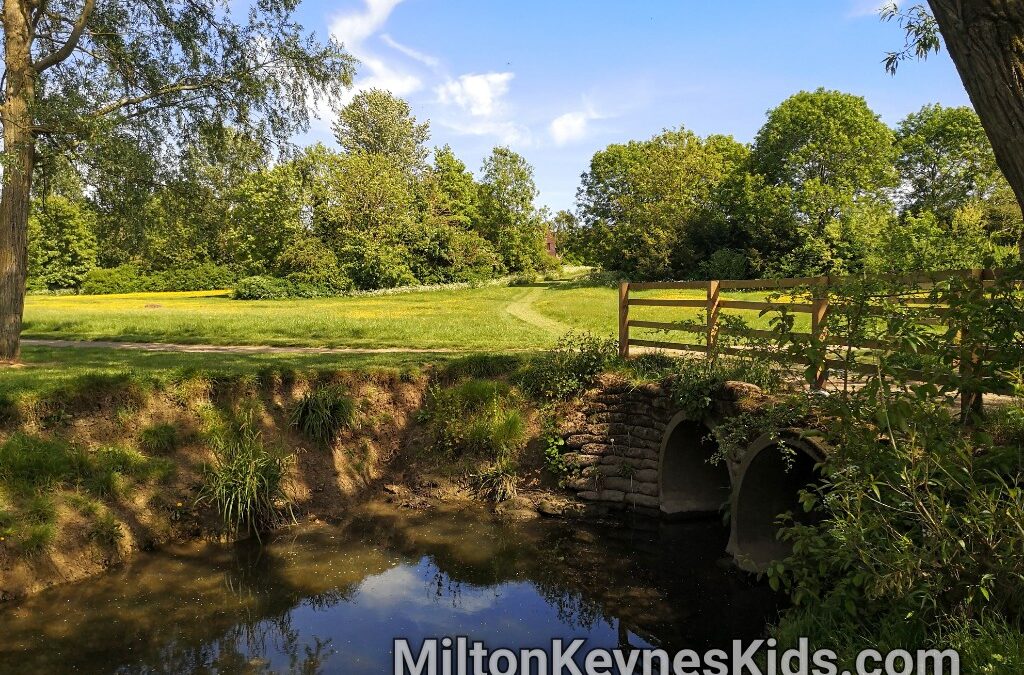 Depending on where you live in Milton Keynes you may not have heard of North Loughton Valley Park. And yet it’s the location for some of Milton Keynes’ most famous residents – one set of the concrete cows. There’s also the remains of a Roman Villa there. This is one of the many local walks we did during the coronavirus pandemic in 2020 – at a time where we allowed to travel for exercise – but play equipment was closed. We had visited before but only briefly when we’ve gone to Bancroft park which is next to it. This is my review of North Loughton Valley Park – one of many parks in Milton Keynes that we have visited. It’s free to visit and free to park. If you do find this post useful and create some wonderful memories with your children, please do consider buying me a coffee to help with the running costs of this website, Milton Keynes Kids is run independently with no advertising in addition to my day job. Thank you. 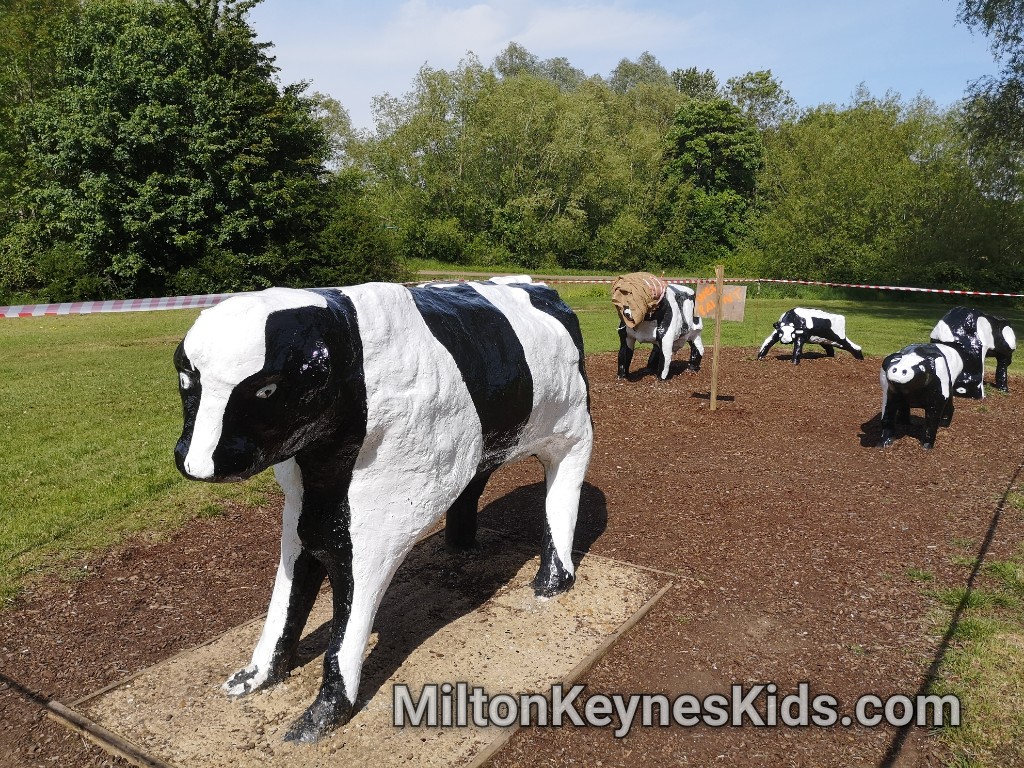 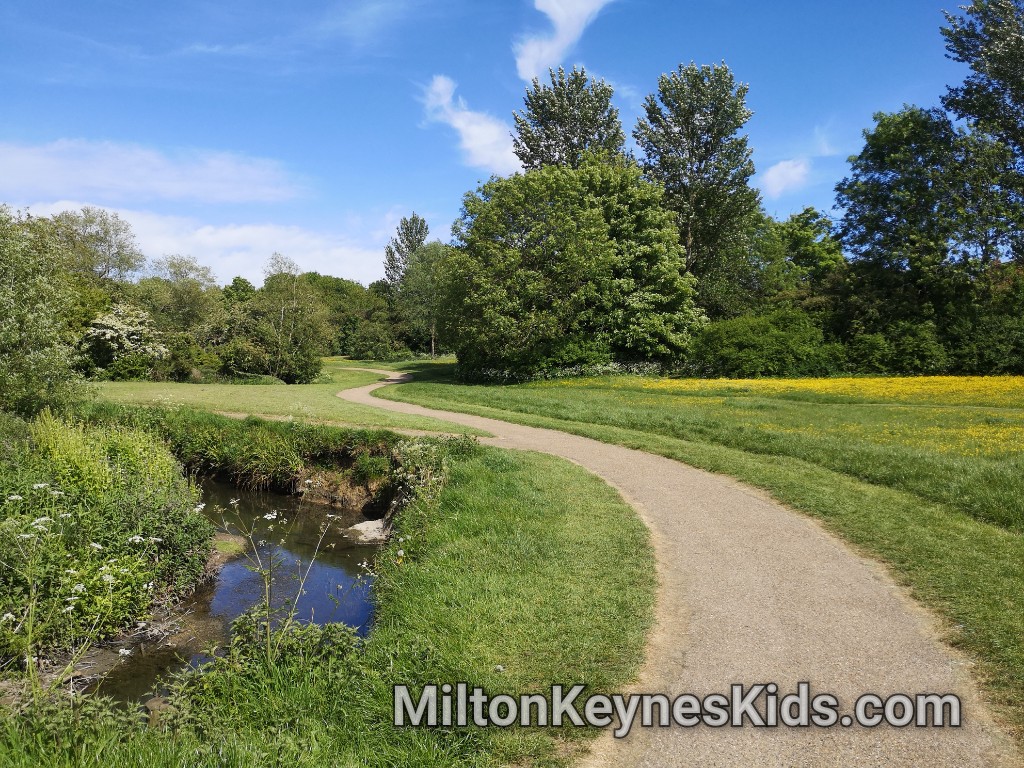 Where is North Loughton Valley Park?

North Loughton Valley Park is a large park that goes through a number of areas of Milton Keynes starting from Blue Bridge, through Bancroft, and on to Wymbush. However we walked from Bancroft, up to the concrete cows and back again which was long enough for my two sons aged six and four. One was on a scooter, the other was walking. We parked at Bancroft. There is a dedicated car park off Constantine Way. I just put in ‘Constantine Way into my sat nav – but I ‘think’ an approximate postcode is MK13 0RA. There is also apparently another car park at at Bradwell Abbey by the City Discovery Centre. Please bear in mind there are no toilet facilities at this park so I’d suggest only visiting if you’re local. 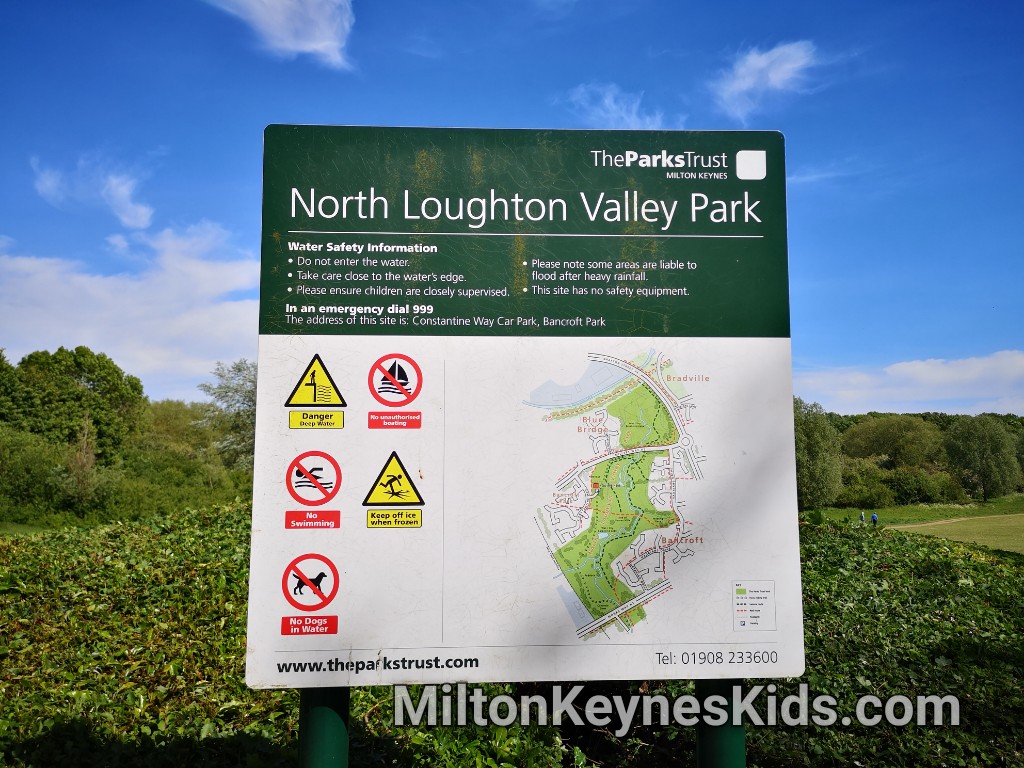 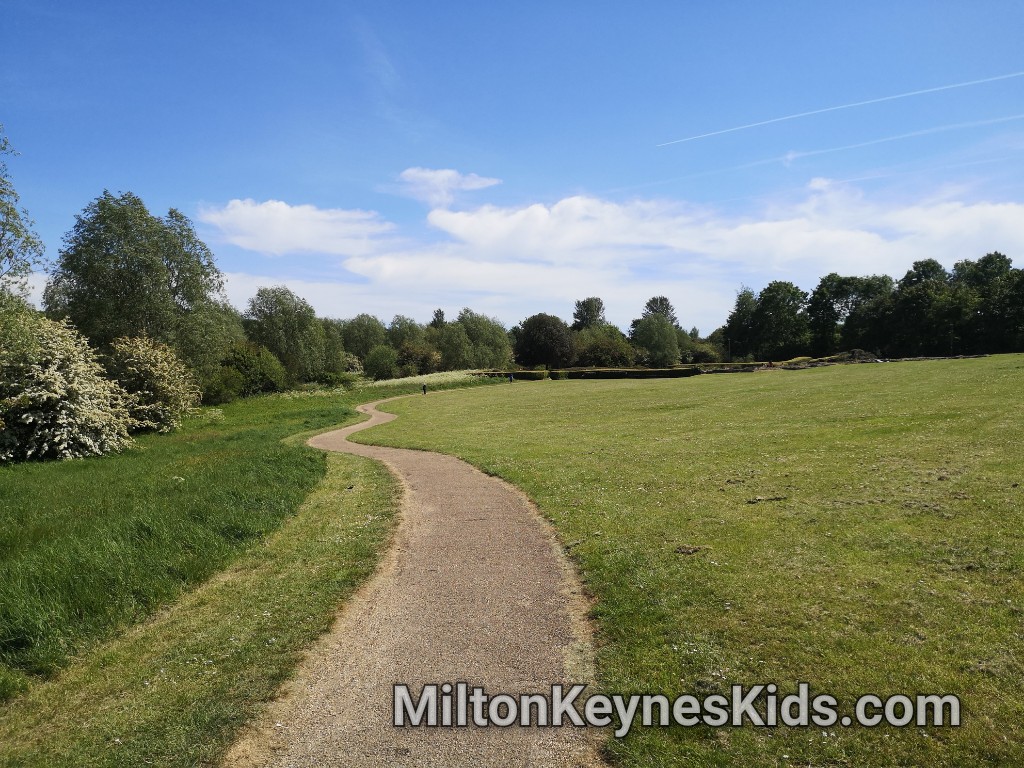 What are the best bits of North Loughton Valley Park?

From where we parked in Bancroft you can walk down into the park and you come to the remains of the Roman Villa. The signage for it is getting a bit old to be honest but it’s still readable. My eldest son – aged six at the time we visited – finds anything historical on our walks of interest as I know do many children, so it would be great if this were updated. From the ruins we went over the bridge which is very cool, then turned right following signs for the valley park. The paths were accessible and followed a stream. There were lots of buttercups at the time we visited. If you keep on that path you’ll come to an underpass and can carry on walking but we stopped there only to find ourselves on the opposite side of the water to the concrete cows. So we ended up walking back on ourselves to the bridge featured in the image at the top of this page and turned left to keep walking until we found the concrete cows. My children had had enough walking once we’d seen the cows so we turned back round and walked back the way we came. You’ll notice in the photo of the cows one of their heads is covered – it was being repaired and repainted at the time we visited. 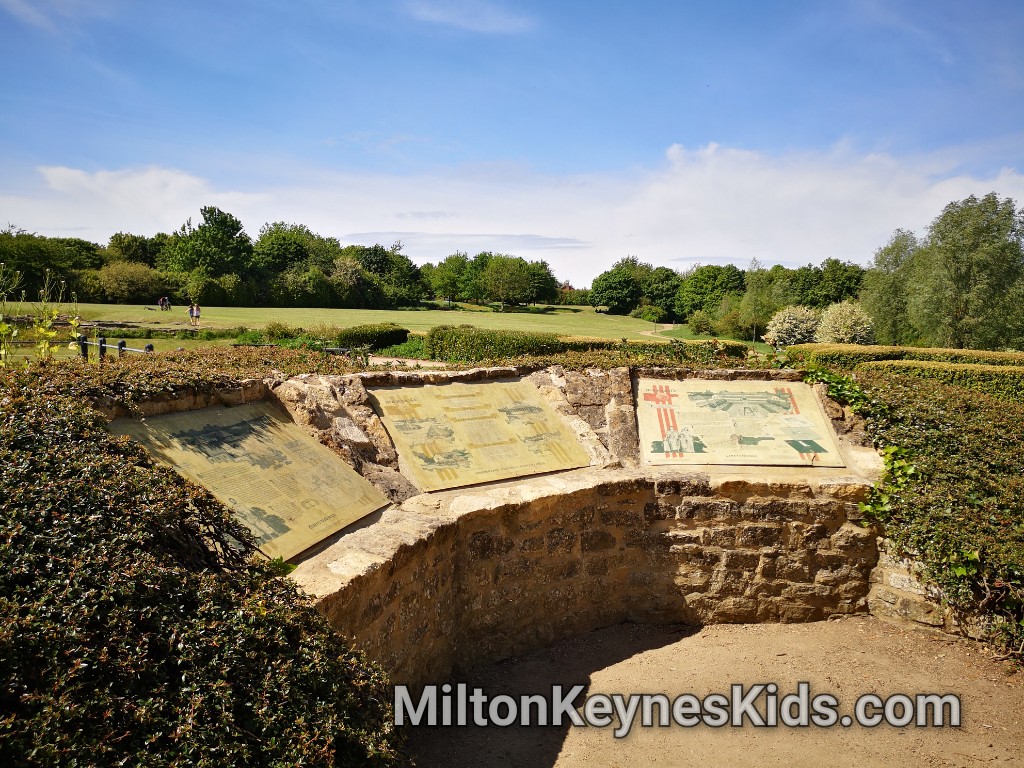 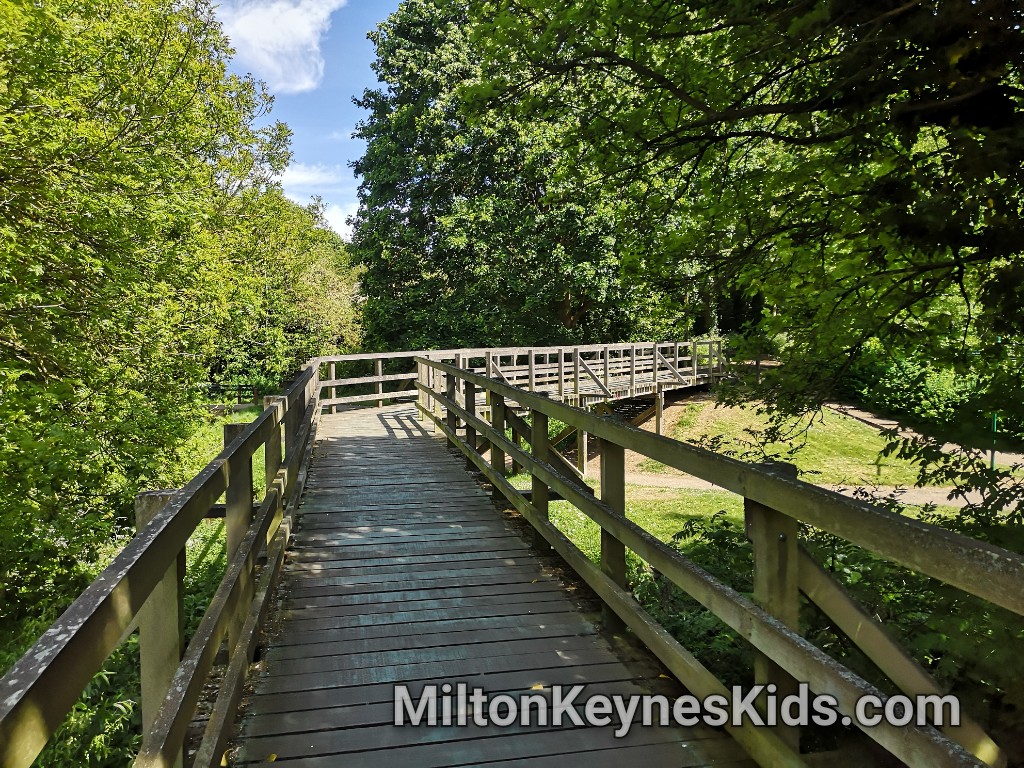 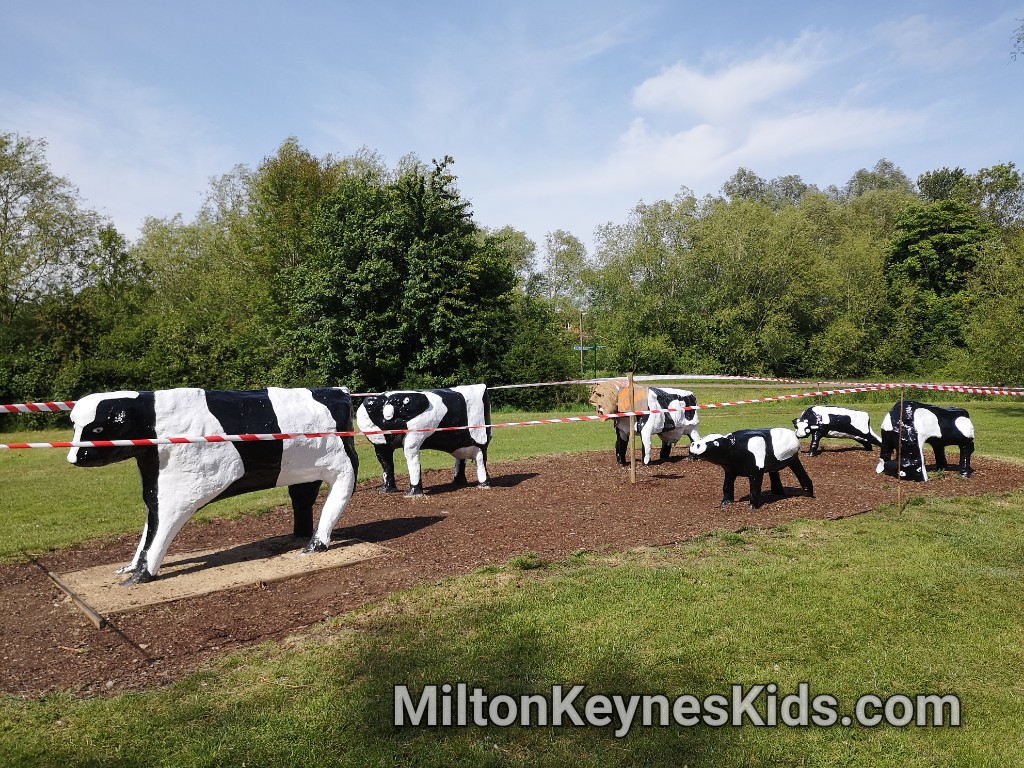 What else should we look out for at North Loughton Valley Park?

Since visiting and writing up most of this review we have been back to find a hidden fairy village. It was made by 8 year old Bella and was there at the time we visited in early June 2020. Before you try and find it, have a look at the Fairy Village facebook page to check if it’s still there. I don’t want you to be disappointed. It’s a small handmade village with lots of little houses and buildings for fairies and in the middle of a field. From the car park mentioned above instead of walking down to Roman Villa remains you need to walk down slightly and turn left following signs for Loughton Valley Park – North, the petanque area will be on your left. Keep walking down that path, you’ll come to a bridge and just over the bridge in the field is the fairy village. If you can’t find it there is a map below which shows you where they are. Once you’ve finished there you can then keep following the path which will join you up to the big bridge pictured above. 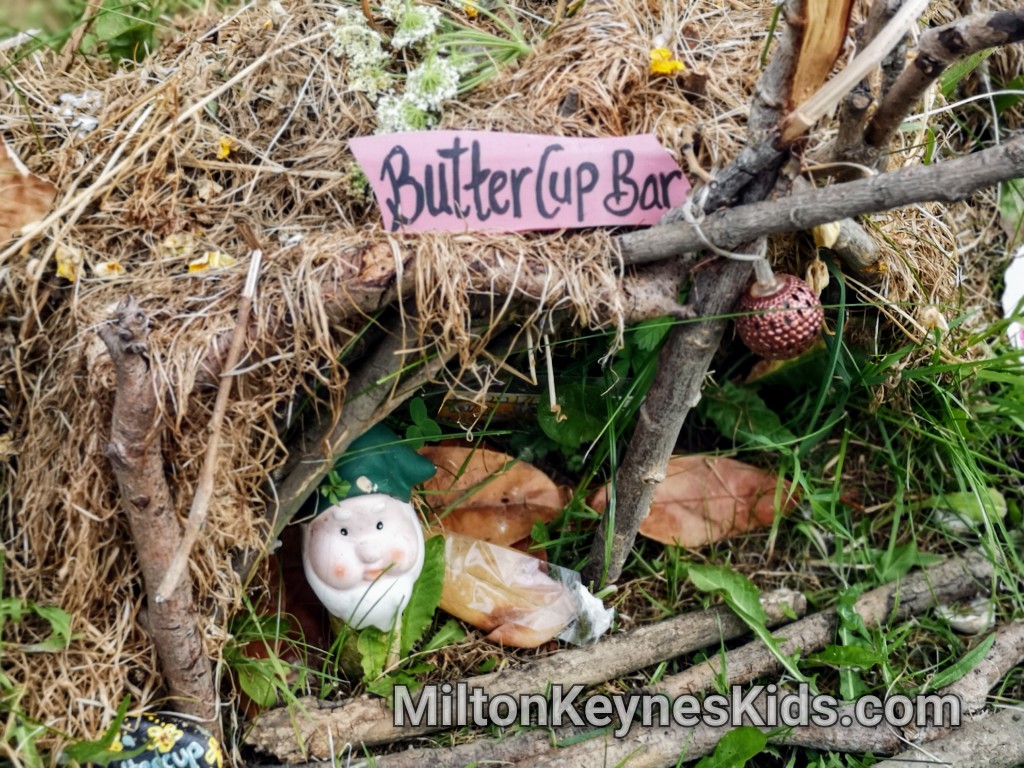 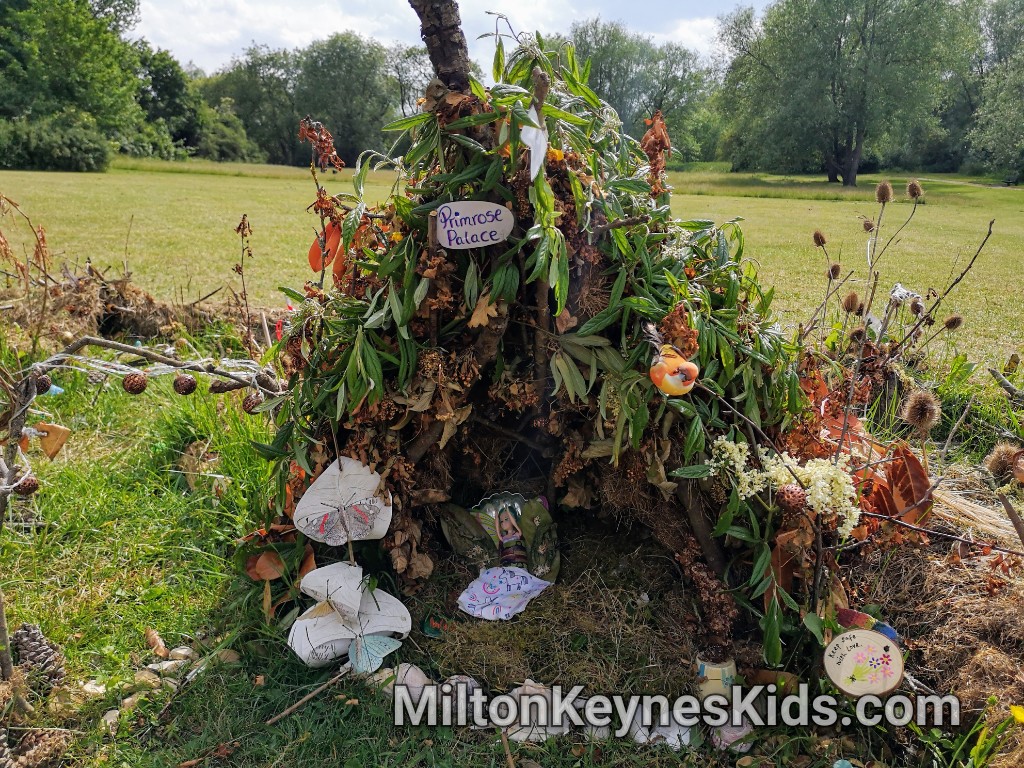 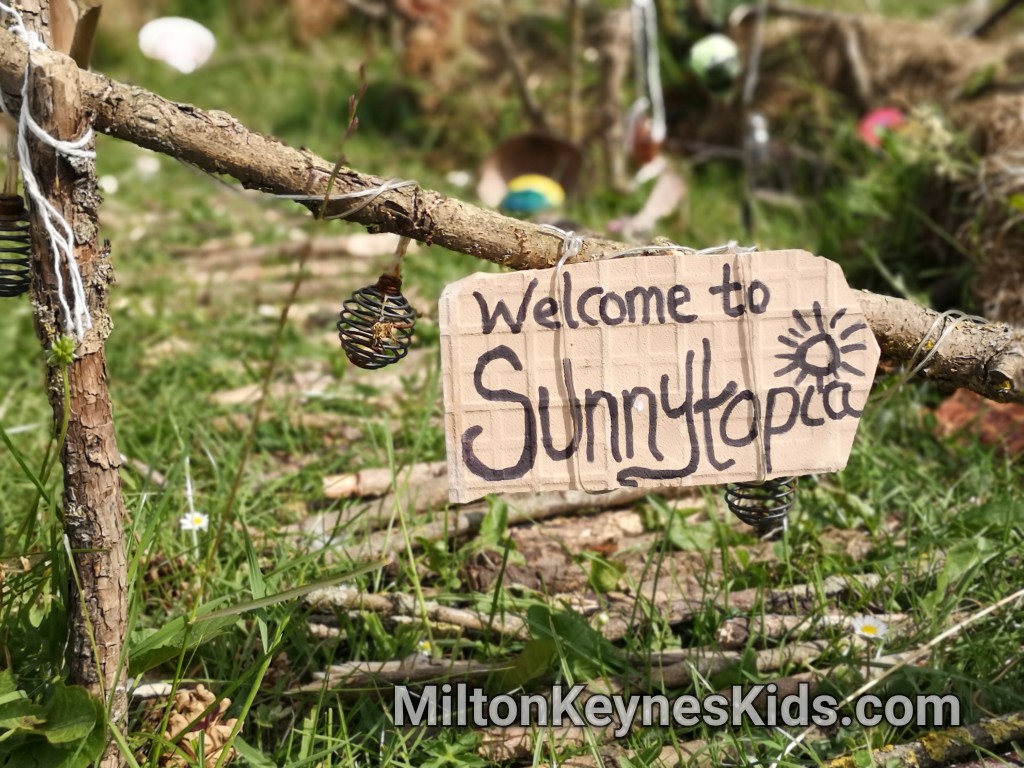 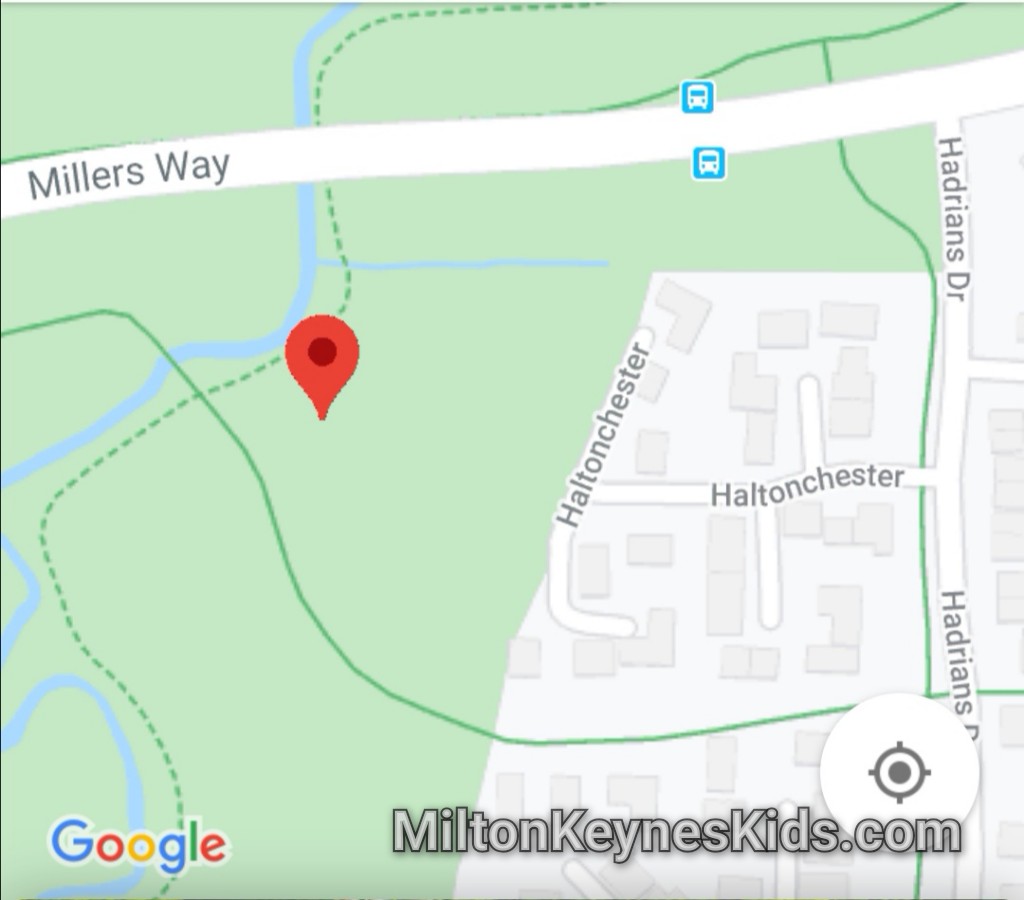 The pictures featured are only from the Bancroft part of North Loughton Valley Park up to the concrete cows – it continues on further – so you can extend the walk or cycle too. This distance was more than enough for my children. There are no toilets so I’d suggest only visiting if you’re local or wait until more cafes and restaurants are open. One top tip is that there is a super cool play area there too. We weren’t able to go back when we visited as all play equipment was closed. However it’s well worth a visit in the future. Once you’ve seen the remains of the Roman Villa and crossed the big bridge instead of turning right into the valley park carry straight on and you’ll come to the play area. Here are more pictures of the Bancroft play area. If you appreciate street art – or your children are interested in space, look out for the space picture under the underpass passed the concrete cows. 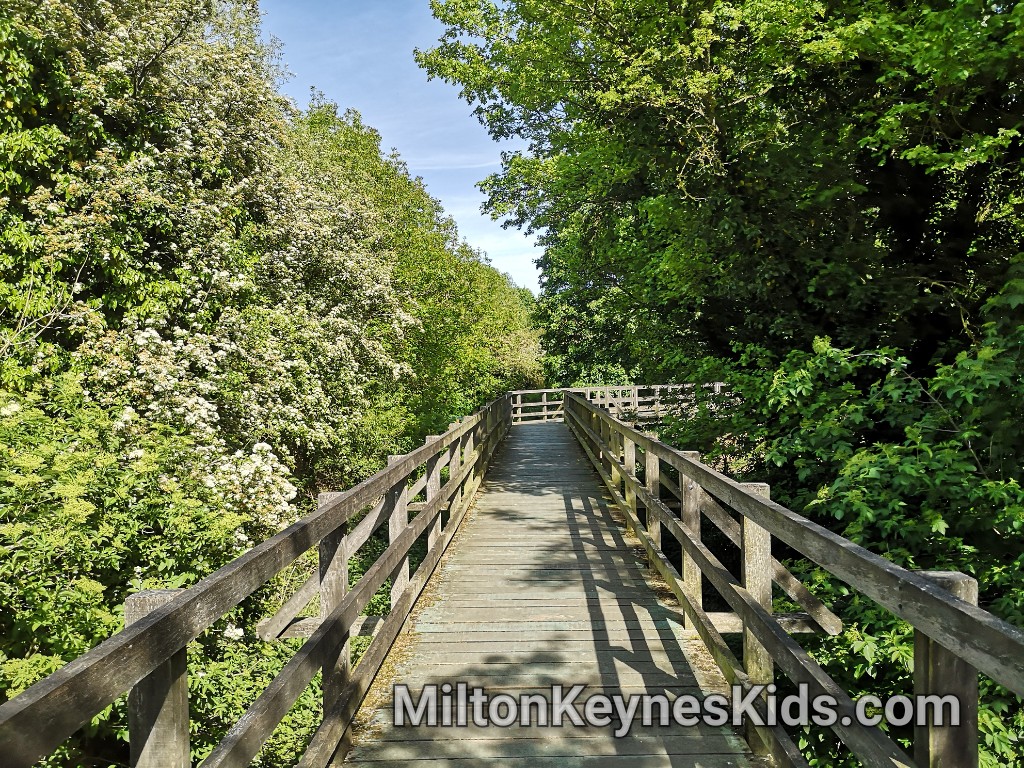 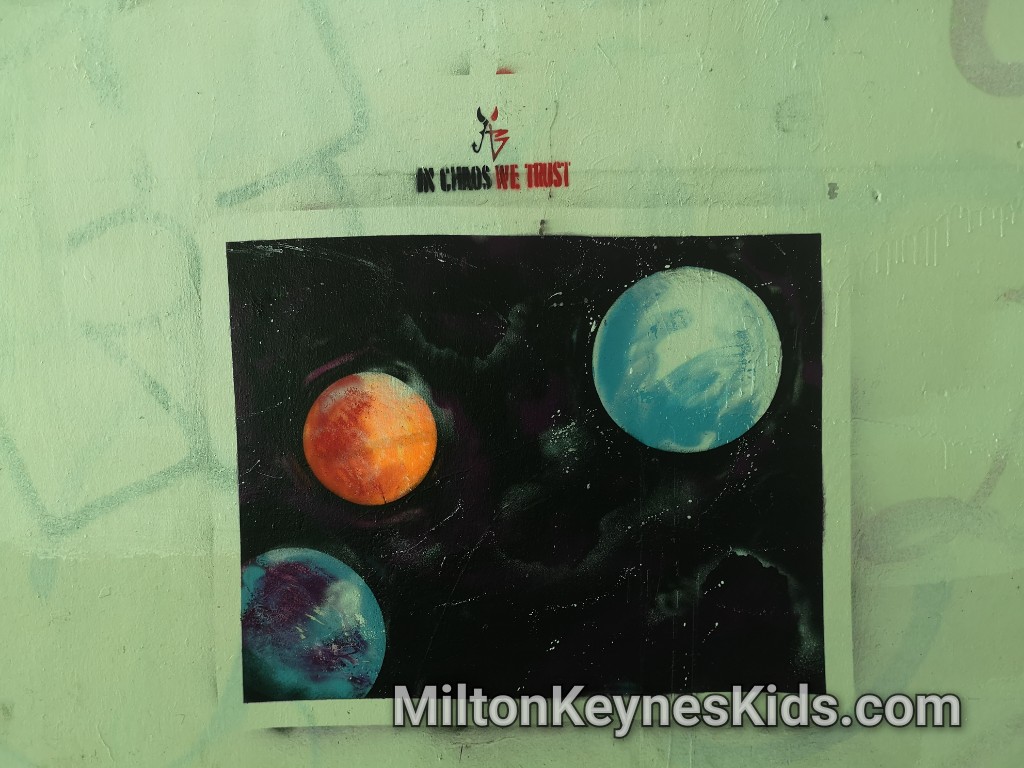 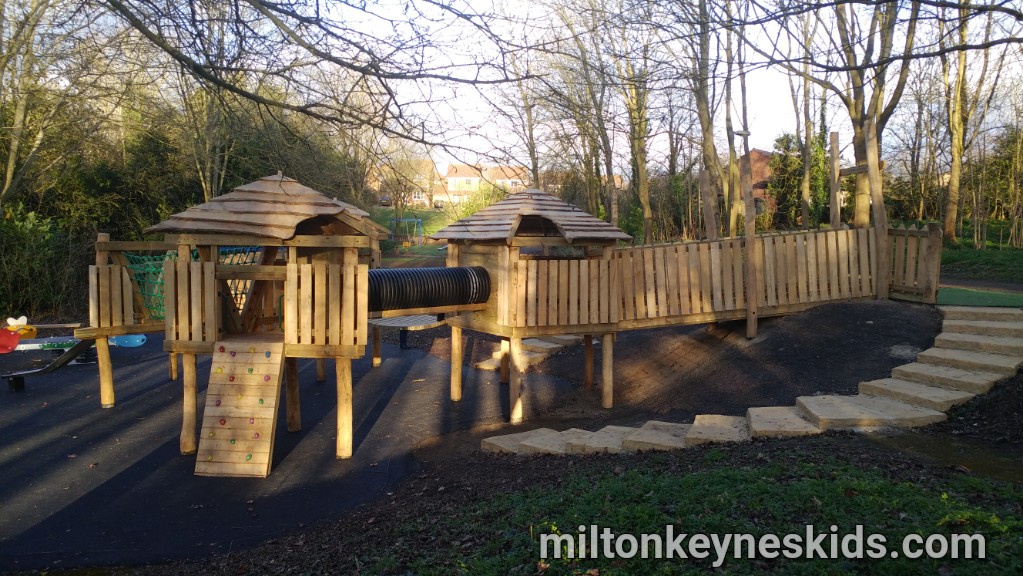 We enjoyed the walk at Loughton Valley Park – where else can we go?

There’s a whole list of local walks in and around Milton Keynes on my website which you may enjoy too. Once restrictions on play equipment are lifted there are lots of reviews of parks with play areas you may find useful.