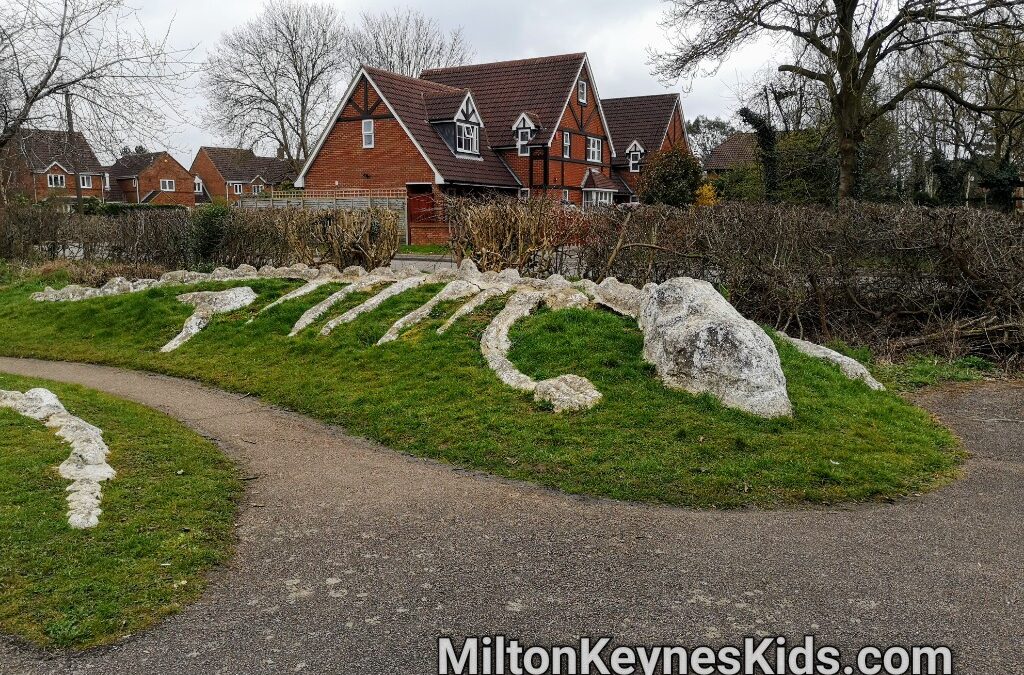 There’s a dinosaur bones themed park in Caldecotte, Milton Keynes. I took my sons to visit it in March 2021 when they were 7 and 5 years old. It’s one of a large number of reviews of parks in Milton Keynes that you can find on this website. If you find the information useful please do consider buying me a coffee to support the running of Milton Keynes Kids. All the reviews are independent and there’s no advertising. 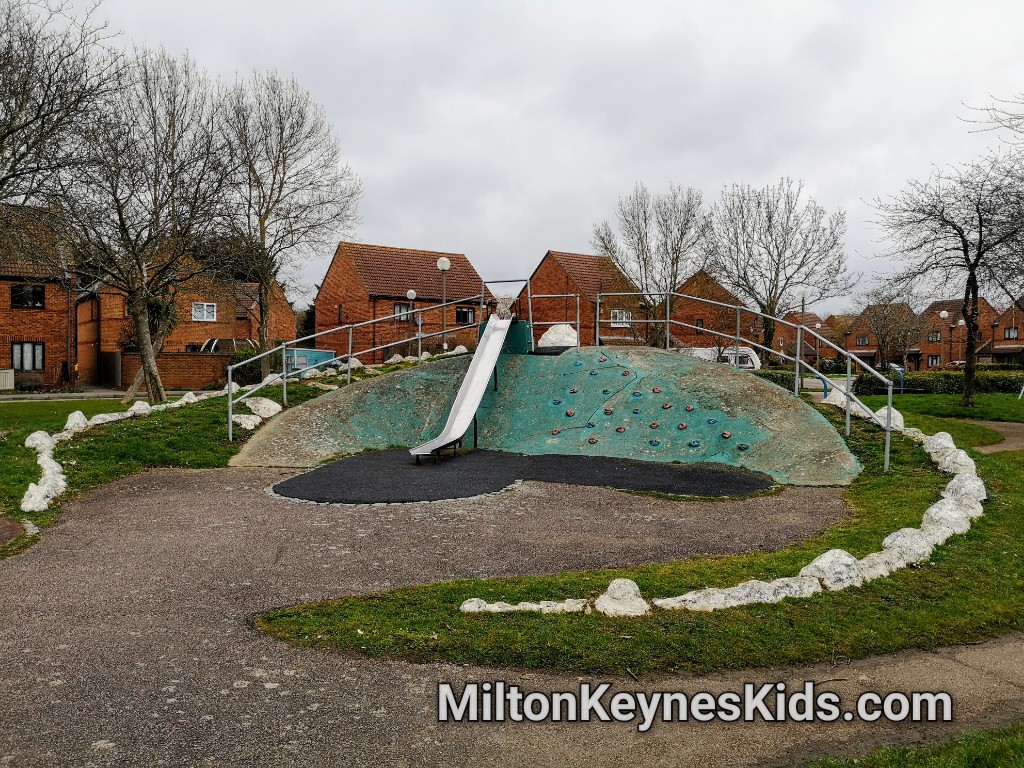 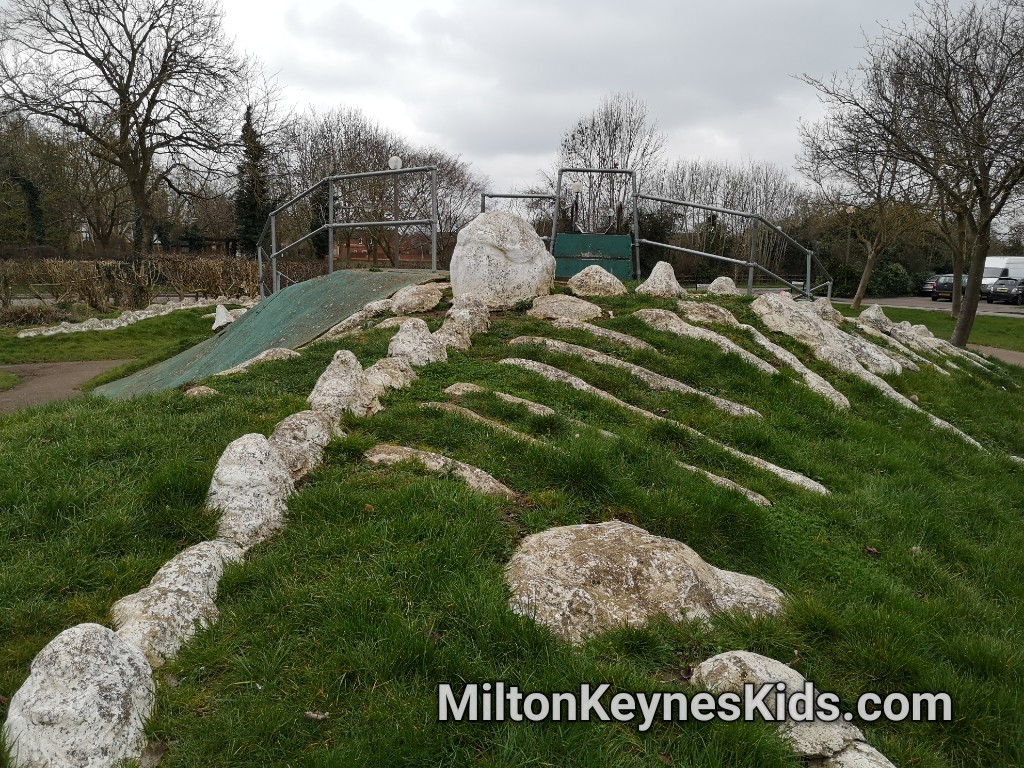 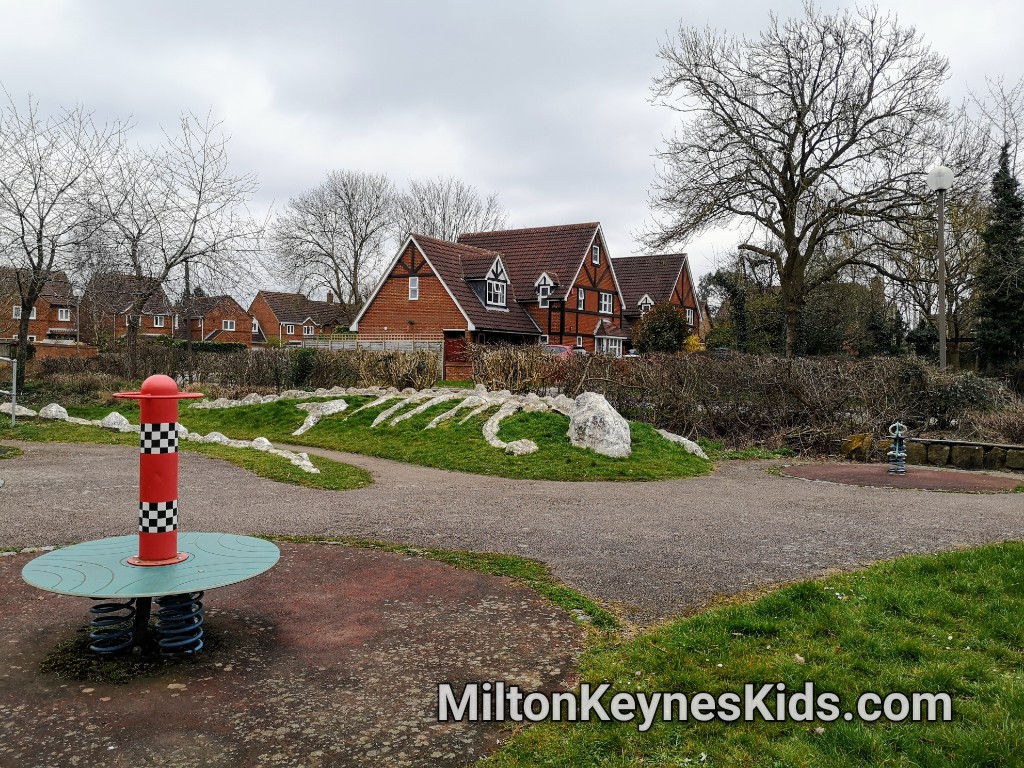 Where is the dinosaur skeleton park?

The dinosaur skeleton park is located in Caldecotte, a residential area of Milton Keynes, not too far from the popular destination of Caldecotte Lake. The nearest car park (and as not to annoy local residents) is the Caldecotte Lake South car park. The approximate postcode is MK7 8AD. From the car park you need to head slightly back on yourselves on foot and head down Caldecotte Lane. The park is then located on your left at Wadesmill Lane opposite Onslow Court. 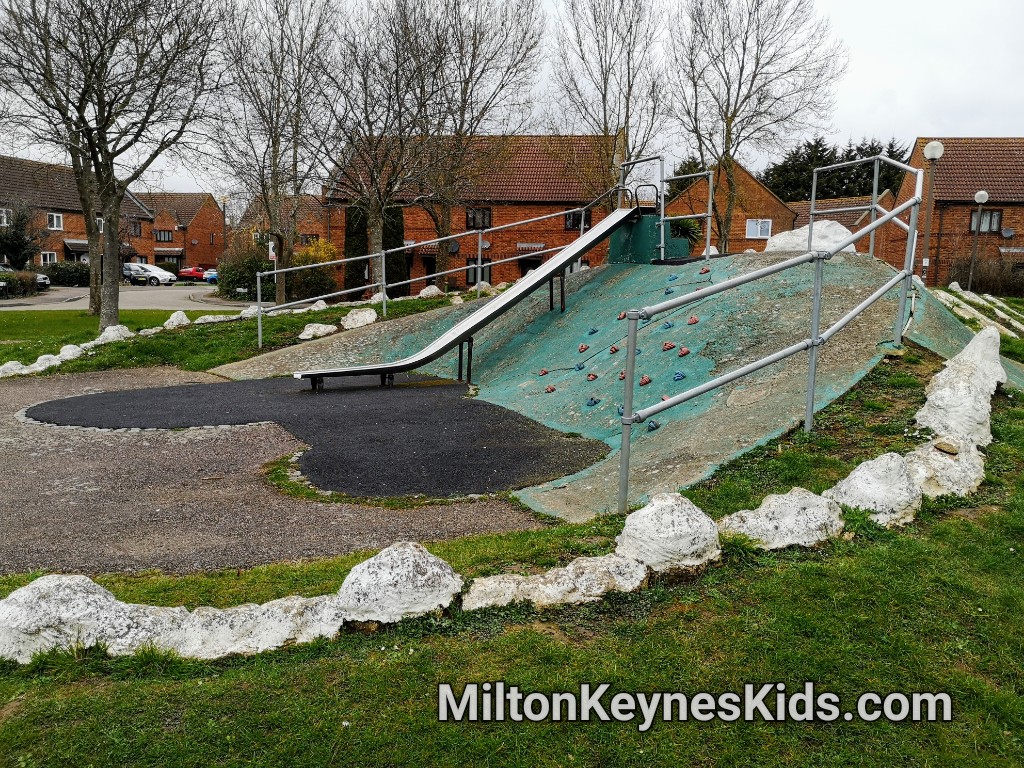 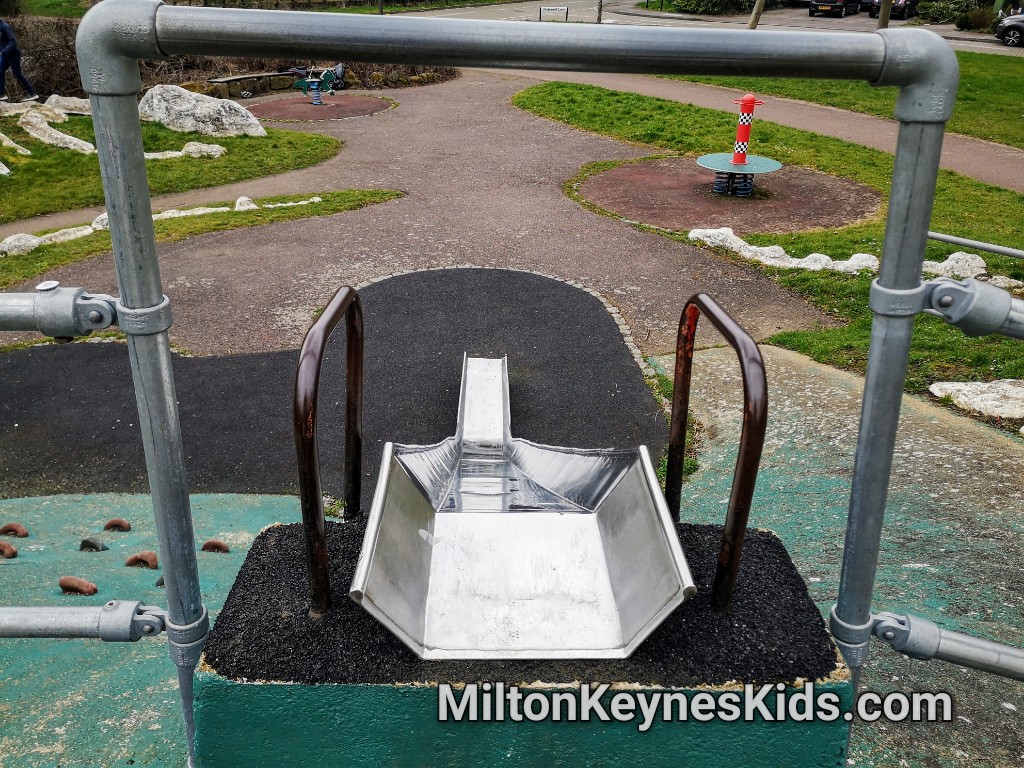 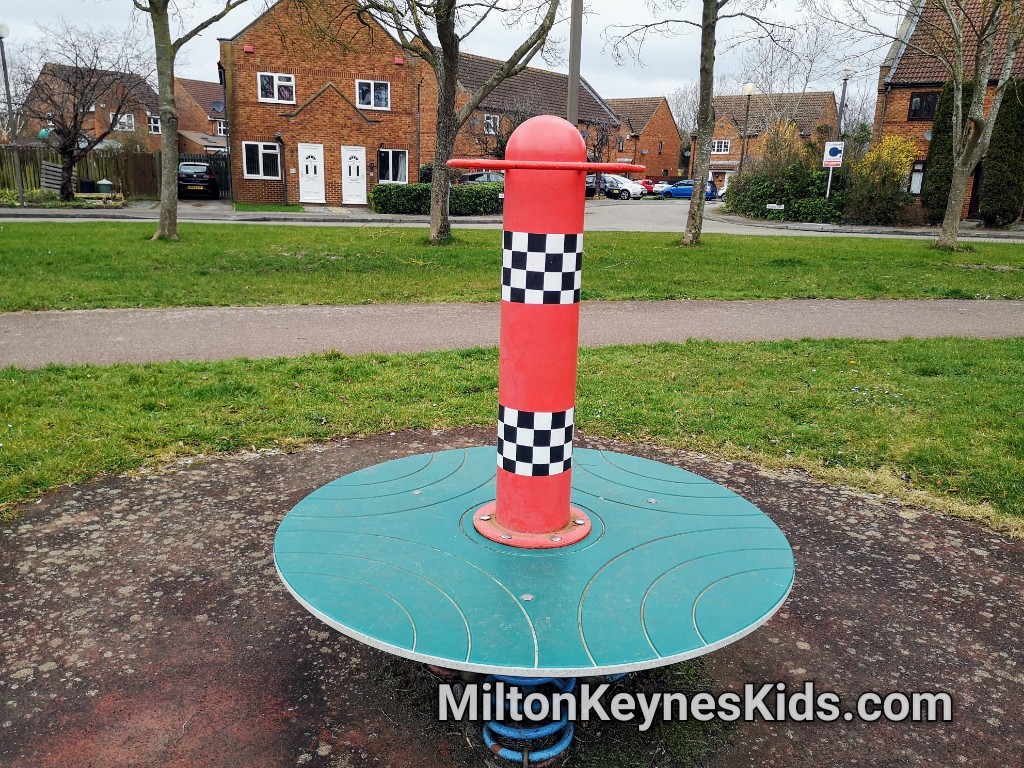 The dinosaur skeleton park is a relatively small, older play area located in Caldecotte, Milton Keynes. According to this website the dinosaur bones were created by artist Billl Billings after an actual fossil of an Ichthyosaur was discovered in the 1982 excavations for Caldecotte Lake. (That fossil can now be seen behind glass high up on the wall in the reference section of Milton Keynes Central Library should you want to visit when it’s open). We liked the fact that it’s a themed park as themed parks are often good for role play and memorable should we want to visit again. There’s a slide, a small climbing wall and swings. It’s not gated. My boys had a good run around it although lost interest after a short time as there wasn’t a huge amount of play equipment there. The park did feel dated and definitely at minimum the bones deserve a repaint. Having looked up the history of the park once home, I do wonder if more could be made of its history, with additional information about who created the bones and why rather than it being left as another park to fall into disrepair.  Like many of the parks we visit and feature on this website it’s worth a visit, particularly if you have younger children who are dinosaur bones, but I’d say it’s a park to visit as part of a longer walk, or if you’re local to Caldecotte, rather than as a destination to head for. 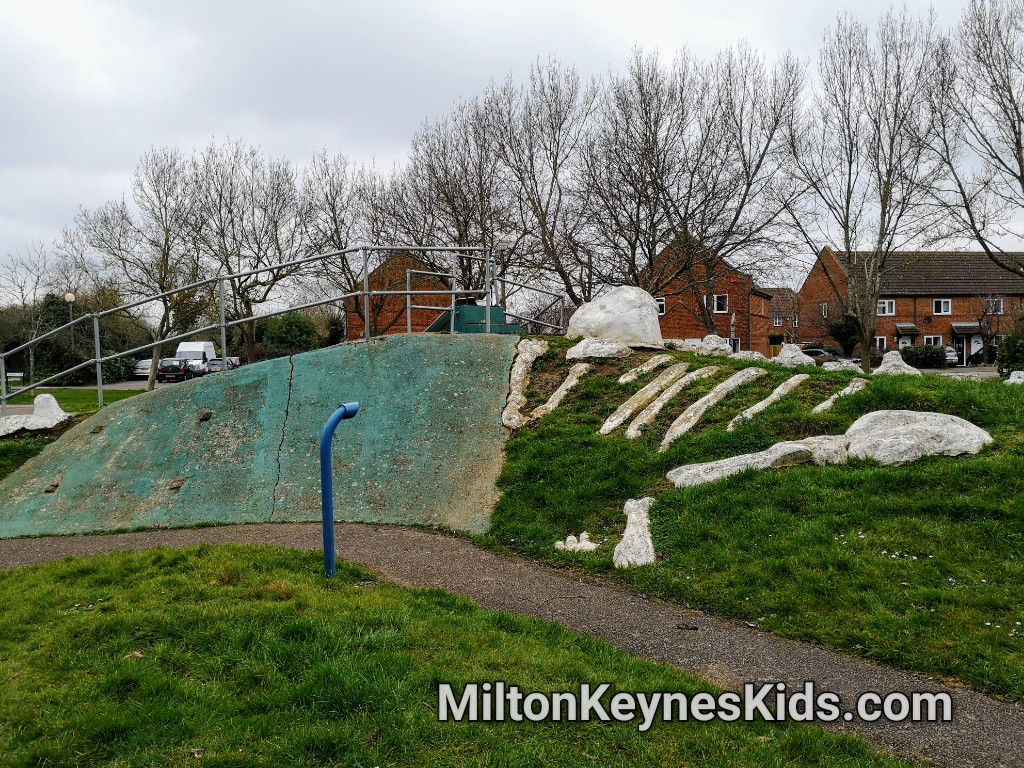 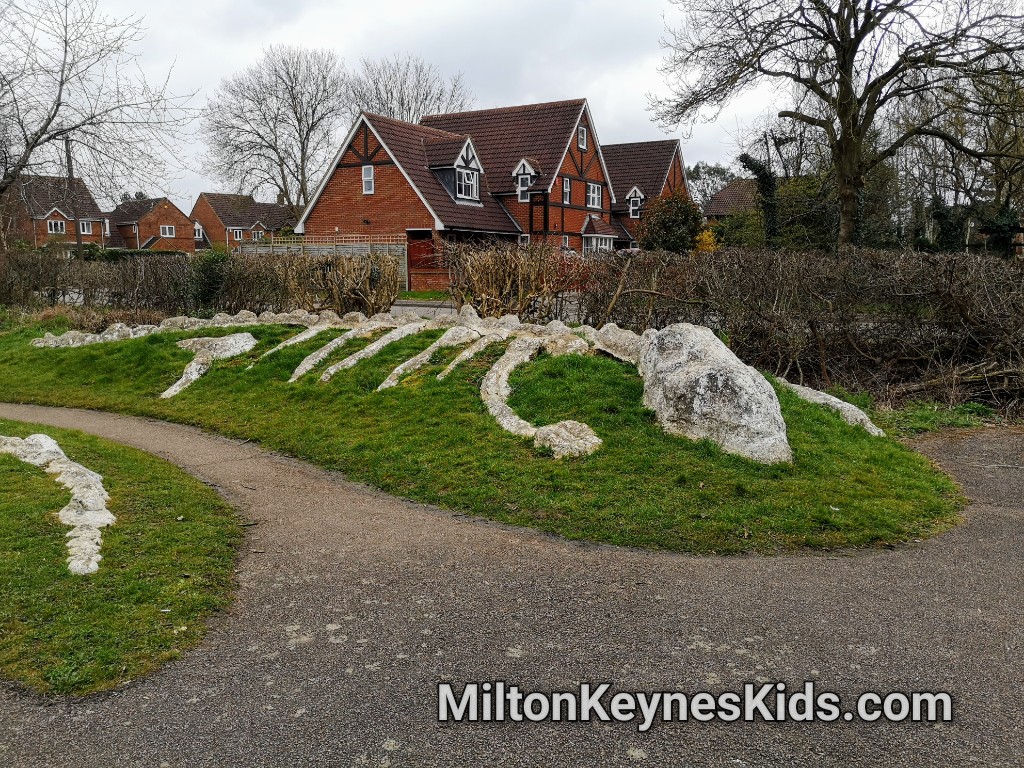 Where else can we go after the dinosaur skeleton park?

There’s a few parks which are easy to walk to from the dinosaur park in Caldecotte. If you head back to the car park, but then instead turn left down Monellan Grove there’s a play area there which is quite good. There’s a good sized slide, nest swing and climbing frame there. There’s a pirate ship themed park located off of Gatewick Lane. And there’s a modern but small park with sand and pulley off Wadesmill Lane near Chase Avenue. If you want to go around Caldecotte Lake, then it’s about 5km around both lakes. If you fancy trying some other parks in Milton Keynes then do have a look at my map so you can see where else you’d like to visit nearby.